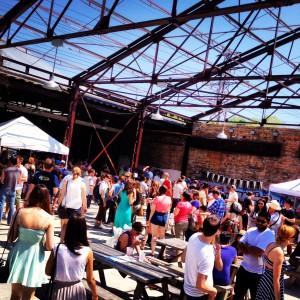 We are thrilled to announce some details about our next Brewer’s Backyard, which will happen on Canada Day, Monday July 1st at Evergreen Brick Works.  And for the first time, our event will be tied to the Brewery Market, which will be taking place the following Sunday, July 7th in Ottawa.

Entitled The Capital Mashup, this very special event will feature exclusive collaboration beers between some of the finest brewers in our province’s capital cities of Toronto and Ottawa!

We will have special collaborations between Great Lakes + Cassel, Amsterdam + Broadhead, and Indie Alehouse + Beyond the Pale.  Each of the collaboration beers will debut at the Brewer’s Backyard on July 1st, and again served at the Brewery Market on July 7th.  Each event will also feature beers from the participating breweries as well, along with a number of local food vendors.  We believe this is a great way to celebrate the awesome brewing scenes happening in both Toronto and Ottawa.

More details about each event will be announced in the coming weeks.  But in the meantime, mark down July 1st at the Evergreen Brick Works in Toronto (12-4pm, Koerner Gardens and Holcim Gallery) and July 7th at Parkdale Park in Ottawa.  We’re looking forward to seeing you at these very special events!